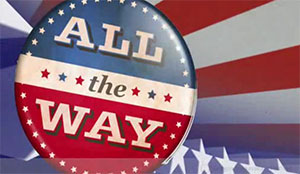 All the Way
by Robert Schenkkan

Robert Schenkkan has written a masterful script that projects a sharp look at the leaders of America during the year which was more or less between my 10th and 11th birthdays.  I had expected a pleasant play that would remind me of my precocious political awakening.  I wound up dazzled by how well Schenkkan presents the feel of that first post-Kennedy year and by the tragic-hero humanness of the real-life figures that fought for civil rights, the Great Society, and for the liberal values that made the United States an economic and moral force.

Unlike many of the world premieres and commissioned works produced recently at the Oregon Shakespeare Festival, All the Way is a classically constructed evening of theater.  That traditional approach, flawlessly executed, lets older theater goers experience the production without stretching uncomfortably to understand the format.  ATW is a wonderful play;  it's not a performance piece nor a dressed-up poetry rap.  It taps into the power of a linear story, rising action, imperfect giants, and changed characters.  Its straight-forward plot and wording are evidence that the truisms of play design you learned in high school English class remain valid.

ATW is gimmick-free art. It is a camera-ready canvass for the director, actors, set designer, costume designer, lighting designer, ... everyone... to apply their talent.( Collapse )

Yes, I expected a lot from ATW.  I anticipated a good time reliving dramatic highlights from when I was becoming politically aware.  I was looking forward to seeing how history would treat Lyndon Johnson, a man who accomplished so much and was so widely despised.  But, I wasn't ready for an piece of art that so thoroughly wove humanness and politics into a captivating narrative of American history.