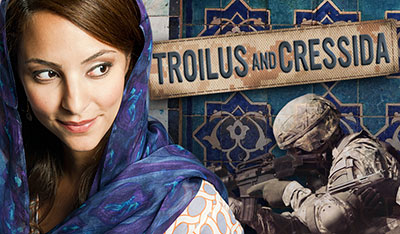 Troilus and Cressida
by William Shakespeare

Most of the flash and bang of this infrequently produced Shakespeare play comes from the modern ordinance that accompanies Troilus and Cressida's teleportation into the 21st Century Middle East.  T&C is not bad entertainment, but I experienced no bite, no zing in this deeply cynical tale.

The story of how almost everyone at every level is dishonest or deluded, especially when it comes to patriotic wars, is an always-timely subject.  While the language is clear and the context maintained throughout this performance, only once did I feel truly miserable for an on-stage character as they were being betrayed.  The other instances of cheating and disappointing behavior went by without dramatic intensity.  So she picks up with a new guy at night after swearing undying love for you this morning? So what? Get over it already.( Collapse )

Four years ago at Presidential election time, OSF produced a tight, topical version of Coriolanus. That show was a spectacularly depressing reminder of the consistency of war, politics, and hypocrisy.  We left the New Theater in 2008 wondering why Coriolanus was so infrequently selected for production.  I suspect that in the hands of a better director, we would have similar questions when we left the New Theater this year after seeing T&C.