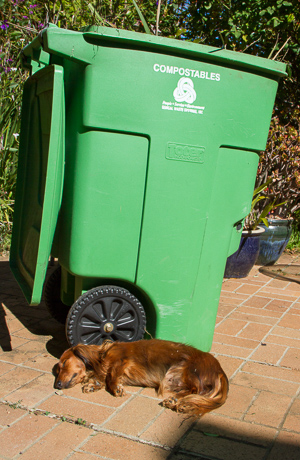 SeQueL is not pregnant, but she is healthy and very comfortable.  When we went to the reproductive specialist vet a couple weeks ago, the ultrasound showed no living puppies.

The vet, Dr. Janice Cain of Bishop Ranch Veterinary Center is the area's best, according to our breeder friends who insisted that we go to her, even though she's located across the Bay Bridge in deepest suburbia.  Dr. Cain was very careful with us, and talked about how relatively common losing a litter is.  Ten years ago, she said, the ultrasounds were not as good, and we probably would have assumed that the breeding didn't take.  With today's equipment, we know SeQueL had puppies for a while, but lost them. She said the causes of failed pregnancies are not known. She said that no one funds research on why dogs don't get pregnant, but there's lots of money available to figure out how to keep dogs from unwanted pregnancies.

Dr. Cain talked to us about SeQueL's diet, environment, and attitude.  She reassured us that neither Geoff, SeQueL, our house, our yard, nor I did anything to cause the loss.  The doctor reexamined SeQueL and did some tests to rule out known problems.  The doctor saw no pathology or any condition that would keep SeQueL from conceiving and bringing a litter to term. She said that in her experience a re-breeding after a litter loss results in a healthy litter about 50% of the time.

So, SeQueL is sunning herself leisurely in the backyard.  She's not bloated and not carrying all that extra weight.  She's comfortable, and we're looking forward to the next opportunity she gives us for puppies.