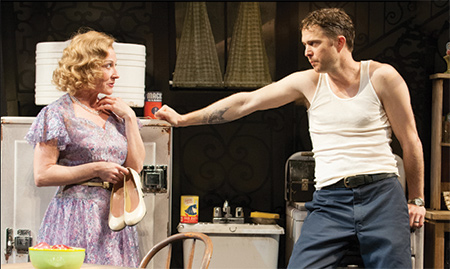 When a complicated, difficult story plays out flawlessly and naturally, the review of the performance can only lift up a part at a time.  Any look back on OSF's A Streetcar Named Desire will fail to capture the depth and flow of the production which needs to be experienced as a whole.

Each of the characters presented on stage felt strong and authentic.  Danforth Comins (Stanley Kowalski) feels young, strong, frustrated, insightful, and horrible at just the right moments in just the right way.  He would steal the show if he wasn't paired with an equally accurate Stella (played by Nell Geisslinger) and a supremely on target Blanche (Kate Mulligan). There are no actors in this play, instead a real-life family drama unfolds in front of 600 voyeurs.

There is no sign that director Christopher Liam Moore laid a hand on the evening.  There is no evidence that he had a vision which he gave the cast to fulfill. Emotions and actions happen naturally throughout the performance without any bumps that take you out of the moment.  The consistent feel that you're viewing an inevitable story is true testament to Moore's firm guidance and creativity.

Nearly every actor and craft were in top form.  The performance I saw had understudy Ted Deasy playing the painfully basic Harold Mitchell, but even with a stand-in every component still meshed.

I especially loved the ornate simpleness of Christopher Acebo's set.  My friends found flaws with the way the audience saw a very New Orleans facade with incomplete walls that made real the tenement jumble and its lack of privacy.  They didn't like seeing actors in the background moving to be in position for the next scene, and they complained about not knowing the route inside from the street (one scene allowed a pathway from the street that seemed inconsistent with all others).  But, to me the chaos and lack of clarity wonderfully accented the dialog and action.

Less controversial were the clothes.  Alex Jaeger's costumes were perfect in time, class, and expression.

Also non-controversial, but a bit off the mark, was a gratuitous look at Comins' nude butt in an early bedroom scene.  We didn't need to see the flesh, and the story didn't need the visual. The lack of audience complaints about the unneeded nudity no doubt stems from the fact it was a very pretty butt.  The scene is innocuous evidence that high-brow theater goers allow prurient interest to derail their normal logical examination of a performance!

Even with its minor flaws, this Streetcar is definitive. The mood, the chemistry, the pace were right. When I see the play again in the future, I'll be measuring the actors to Comins' Stanley, Nell's Stella, and Kate's Blanche.