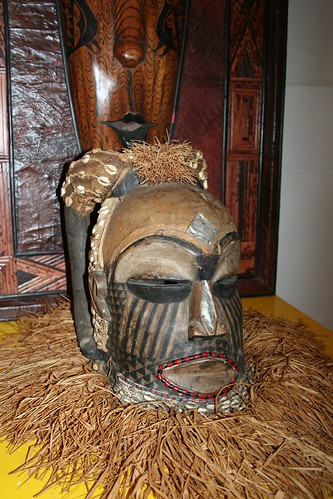 Our itinerary allowed us three decompressing days at sea before our first -- and most southern -- port call in Acapulco.

By the time we were escorted into the harbor by playing dolphins, the weather had become tropically warm.  We were glad to leave the shivering behind.

Our walking tour of the old part of the city started at the fort next door to the cruise ship terminal.

redozdachs had not seen the restored rooms there in his past visits, and we both appreciated the history shown us.

The city streets from the fort into the old town weren't a typical tourist route. They were grimy, unglamorous, and real.

We walked around the zacolo, refreshed ourselves at the courtyard of a clean-but-plain hotel, and saw more working people in the cathedral and surrounding plaza. (I could have done without the final stop -- a shopping opportunity.  But, at least that was confined to 30 minutes or so of the 3+ hour tour.)

We boarded a bus in the evening to see the cliff divers.

redozdachs had not seen the show at night before, and I needed to have my tourist card punched with that event.  For our viewing, six men jumped off the cliff.  A seventh diverted himself from climbing to a platform to instead swim out to a tourist boat to collect money from those sea-side viewers.  The jump is something to see, especially since it's so well known.

The cruise terminal is well guarded.  Police and Federales with impressive weapons were highly visible.  The streets felt too busy and fluid. The tour guide mentioned several times the unhappiness with the rise in the price of tortillas that accompanied the installation of Mexico's new president (and we saw an Obrador tent in the square).  A couple from the Friends of Dorothy had a frightening experience with a cab driver attempting to extort money from them.

I left Acapulco not feeling the need to go back.  A return trip would give me a chance to take better pictures of the cliff divers in the daylight, and

redozdachs would like to explore more rooms at the fort. Not exactly compelling needs.